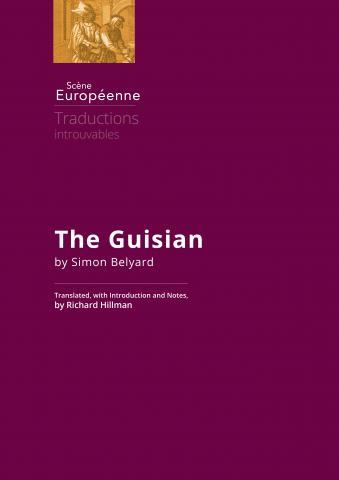 It is tempting to dismiss Simon Belyard’s tragedy as a poor cousin of The Guisiade (La Guisiade) of Pierre Matthieu, the other surviving contemporary French tragedy to deal with the assassination of Henri, Duke of Guise, on royal orders at Blois in 1588. Matthieu’s play, which was widely diffused, with three editions appearing within 1589, stands out as the work of an experienced Humanist dramatist, who was also an able politician. The Guisian, by contrast, which seems to have been the sole dramatic composition of its provincial schoolmaster-author, deploys the apparatus of neo-Senecan tragedy in a cruder way, with caricature taking the place of characterisation and verbal excess regularly displacing poetic nuance. Only four copies survive of the single edition (1592), printed in the playwright’s city of Troyes. Even the work’s militant promotion of the propaganda line of the ultra-Catholic Holy League (Sainte Ligue), which it shares with The Guisiade, has a belated quality, given its relative remoteness from the key event and its seeming indifference to all that had occurred politically since then: the key figure of Henri de Navarre, whose conversion to Catholicism would solidify his claim to the throne as Henri IV in the following year, is not even mentioned.

Yet Belyard’s play has a special interest for historians of English drama. Its most striking departure from French Humanist conventions—the onstage depiction of the murder itself—affiliates it, not just with English practice generally but specifically with Christopher Marlowe’s The Massacre at Paris, which demonstrably imitates Belyard’s sequence. Once this connection is recognised, broader affinities with the neo-Senecan English politico-historical drama of the early 1590s-notably the Shakespearean First Tetralogy-become apparent. Some of the very qualities that might rate as aesthetic defects in French terms were quite at home in the English public theatre. As for The Guisian’s politics, even in this respect conspicuous absence may serve as a mask for plenitude. As in proposed in the Introduction, the question of royal succession, on which Belyard’s work is silent, is indirectly addressed by a companion poem, Charlot, bound in the same volume as the tragedy; there, in celebrating the recent escape from prison of the son of the murdered martyr, Belyard effectively evokes the ‘Estates’ summoned by Charles, Duke of Mayenne, successor to his brother Henri as leader of the League, in order to choose a “legitimate” king for France.